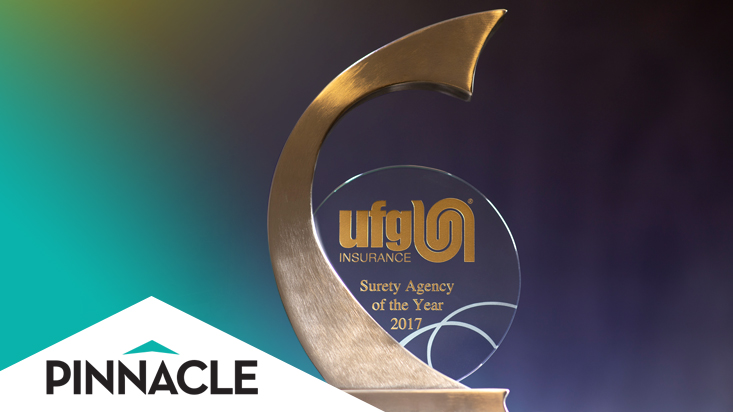 Continuing in the agency’s legacy of excellence, Pinnacle Surety receives recognition as Agency of the Year from United Fire Group during annual agency incentive trip.

Vice President and Director of Surety Bonds, Dennis Richmann, and CEO, Randy Ramlo, of United Fire Group, distributed a limited number of awards during a celebratory dinner held on the final night of the cruise.

Founder and President, Eric Lowey, and Executive Vice President and Principal, Mark Richardson, were both present to receive the award on behalf of Pinnacle and were acknowledged for their achievements in the presence of approximately 200 other dinner guests and event attendees.

United Fire also nominated four additional Surety Bond Companies as potential candidates for the Agency of the Year award before announcing Pinnacle as the official victor.

“We are humbled, thankful, and excited to receive this prestigious award. After 25 years of hard work we greatly appreciate this recognition; the United Fire team has been great to work with and has been instrumental to our success,” said Lowey and Richardson upon receiving the award.

Every year Pinnacle Surety strives to improve business relationships and client satisfaction by ensuring that the company is operating within operational guidelines and industry best practices; this award is evidence of this commitment.